PENTAX: The choice for astrophotography

My name is Takaki Kasahara. I’m an astrophotography equipment engineer; my friends call me Hoshi Otoko, or Star Man.

My astrophotography changed dramatically with the introduction of the PENTAX O-GPS1 and its ASTROTRACER function. In the old days, if we wanted to follow the movement of stars and capture beautiful images of celestial bodies, we had to shift the camera’s position. This meant using heavy, cumbersome equipment such as equatorial devices.

The PENTAX O-GPS1 GPS Unit, launched in 2011, simplified celestial-tracking photography through the use of the ASTROTRACER function in combination with a PENTAX digital SLR camera. Of course, I purchased the O-GPS1 as soon as it was released, and took off with my two cameras — a PENTAX K-5 and a PENTAX K-r — for photoshoots at Mt. Fuji, in the mountainous Okuchichibu region north of Tokyo, and Yuzawa in Niigata Prefecture, looking for a clear sky during the rainy season.

In this lesson, I will share my thoughts on these functions and accessories with hobby photographers looking to photograph starry skies (rather than with experts and specialists of astrophotography) and explain why I think PENTAX is the best photographic gear available in this field.

It has been seven years since the ASTROTRACER function made its debut, so many people are familiar with it. Simply told, this function shifts the camera’s image sensor in synchronization with the movement of celestial bodies, capturing images in which stars and planets appear to be stationary. 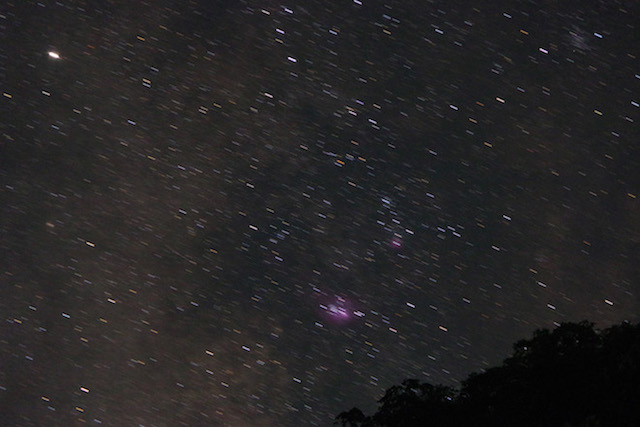 Since the Earth is rotating, extended exposures can result in streaming stars. 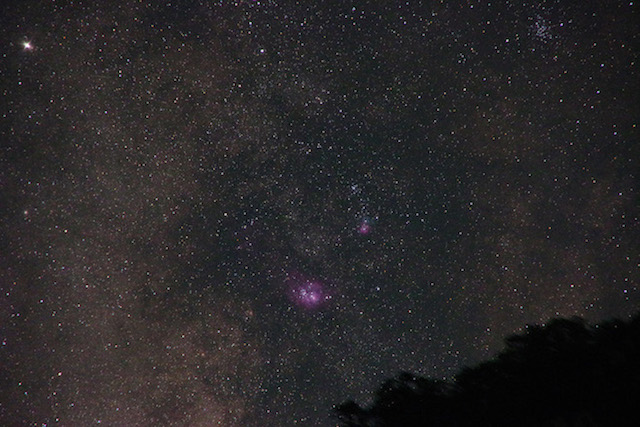 By accurately tracking the movement of the stars, the ASTROTRACER function captures them as point images even with extended exposures.

What is ASTROTRACER?
It is a celestial-tracking photographic function which couples the camera’s built-in Shake Reduction (SR) mechanism with GPS data. (Click here for details)
What is the PENTAX O-GPS1?
It’s a GPS module which allows cameras not equipped with GPS functionality to shoot astrophotography through the use of the ASTROTRACER function. (Click here for details)

Note: PENTAX cameras featuring the GPS function, such as the PENTAX K-1 Mark II, K-1 and K-3, provide the ASTROTRACER function without the need of the O-GPS1.

What is calibration?
This is the process of properly adjusting the O-GPS1 (or a GPS-equipped camera) to obtain accurate position data. (Click here for details)

Thinking about astrophotography, most people who are familiar with photographic gear probably have an image of elaborate and cumbersome equipment. The ASTROTRACER function, however, cuts the required equipment to a minimum.

Photo at right: This setup is all you need! 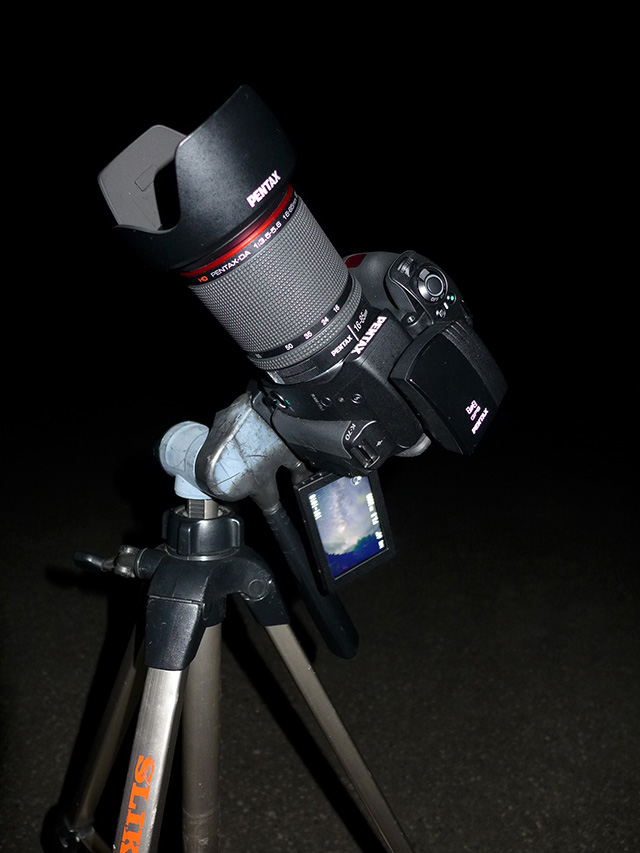 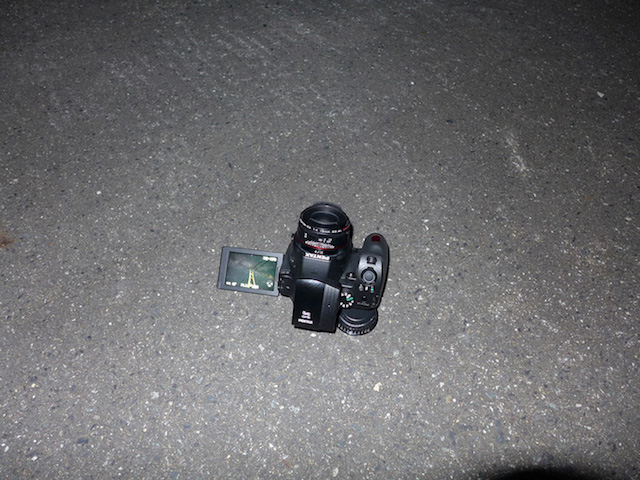 The camera can be placed on the ground if necessary. 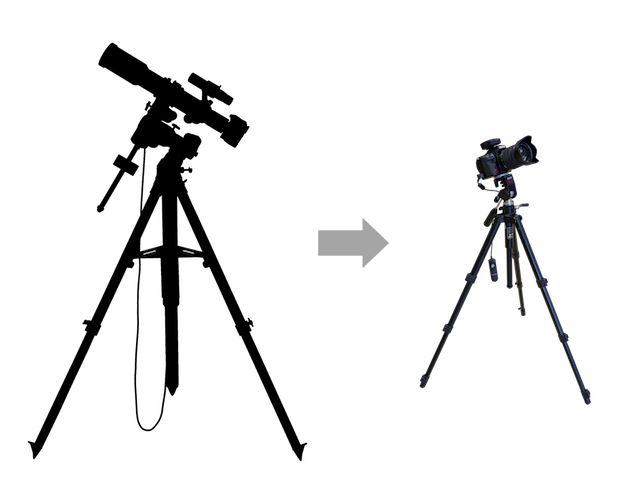 The size and weight of your photographic equipment can be greatly reduced.

The first is simplified, easy-to-understand operations. Just make a high-precision calibration to properly set up the camera, then expose the image for 30 to 90 seconds, depending on the focal length of the lens being used. This captures stars as point images, and also lets you easily photograph the Milky Way and nebulas, objects difficult to even see with the naked eye.

The second advantage is that, unlike when using equatorial equipment, you don’t need special skills or astrophotographic knowledge. Equatorial equipment requires a polar alignment based on the position of the North Star. On the other hand, ASTROTRACER’s high-precision calibration can be made even in the southern hemisphere, where the North Star does not appear. Once you have the camera set up based on the high-precision calibration, the camera memorizes the setup — even when the power is turned off, or when the tripod-mounted camera is repositioned to recompose the image. This is a very helpful feature in the field photography.

Since the O-GPS1 system is lightweight, you can use a compact tripod. When you are in a rush, you can even place the camera on the ground. This free repositioning of the camera is simply not possible with equatorial devices, so this is an extremely important advantage.

Especially with the compact photographic equipment such as portable equatorial devices, image composition is crucial. Even a slight movement of the equipment while composing an image can cause an error in polar alignment. Or if you try to force a difficult composition and throw the equipment off balance, the entire photographic system may be out of line. Either way, the result is streaks, not sharp pinpoint stars, in the image.

The final and most important advantage is the reasonable cost for a full-scale astrophotography system. Equatorial equipment can easily cost JPY100,000 or more; the O-GPS1 retails at about JPY20,000.

The reasons why PENTAX gear is the top performer in astrophotography

I have been describing the ASTROTRACER function, but I also believe that PENTAX digital SLR cameras offer a lot more in functional astrophotography.

Astrophotography is a battle with the evening dew. After an extended shooting session, it’s very likely that the camera will be soaked. In winter, the entire camera system may be subject to the risk of freezing.

Photo at right: The PENTAX K-1 at work under freezing conditions.

A dramatic change of the Vari-Angle LCD monitor’s position or angle after making high-precision calibration may cause a change in the magnetic field around the camera, and affect the accuracy of the camera’s celestial tracking performance. 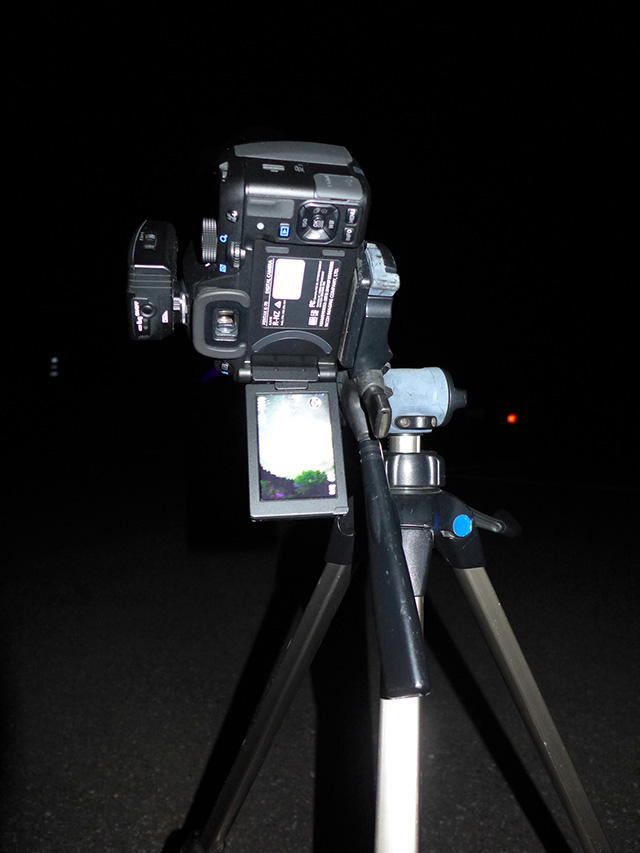 Even though the image below was captured with a general-use, unmodified camera, the reddish area, an HII region released by a gaseous nebula, is reproduced relatively well. 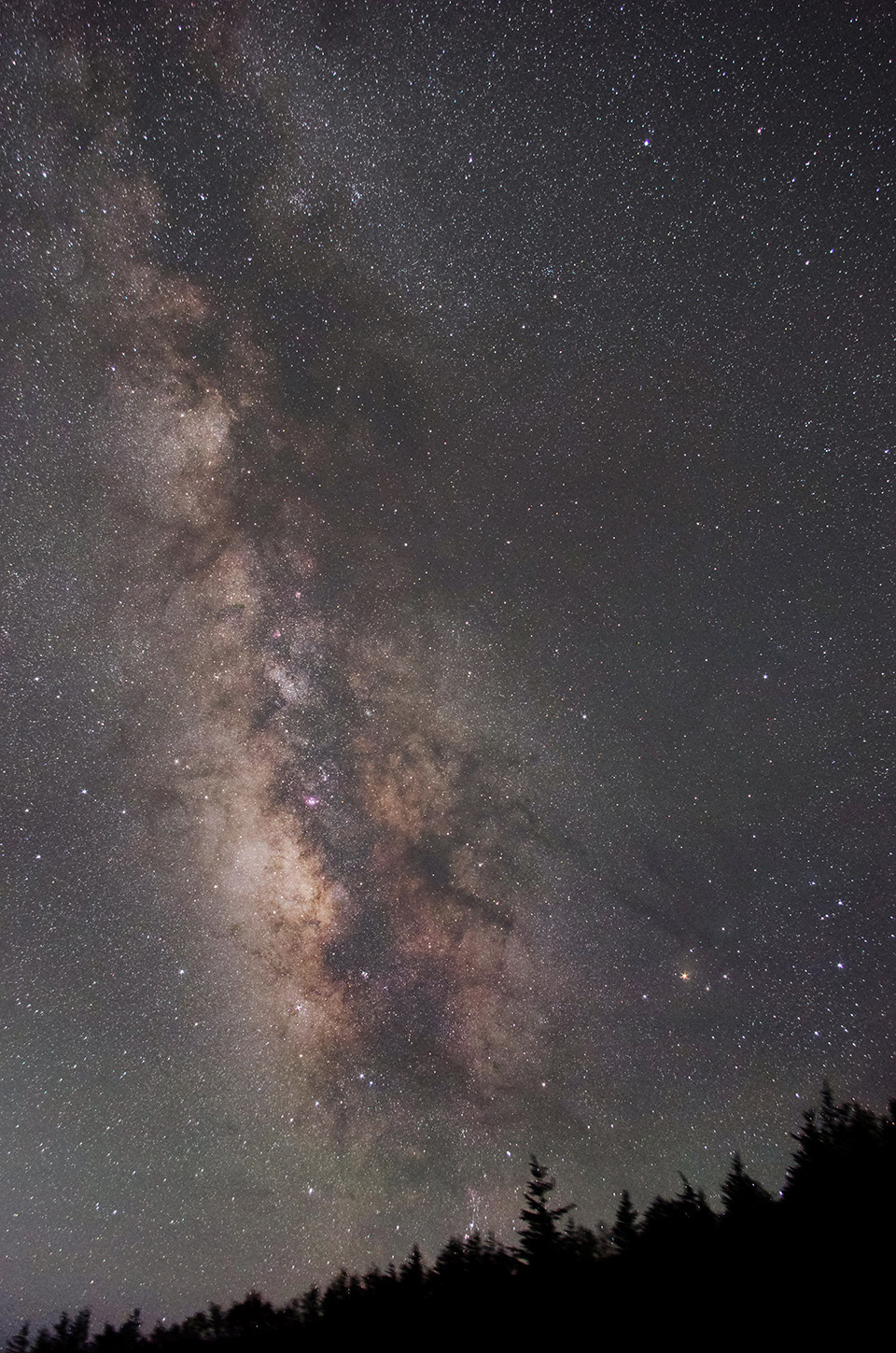 Other noteworthy features include:

PENTAX not only provides a variety of interchangeable lenses, but also markets them at reasonable prices. Thanks to the ASTROTRACER function, you can capture beautiful celestial images even with relatively slow lenses. 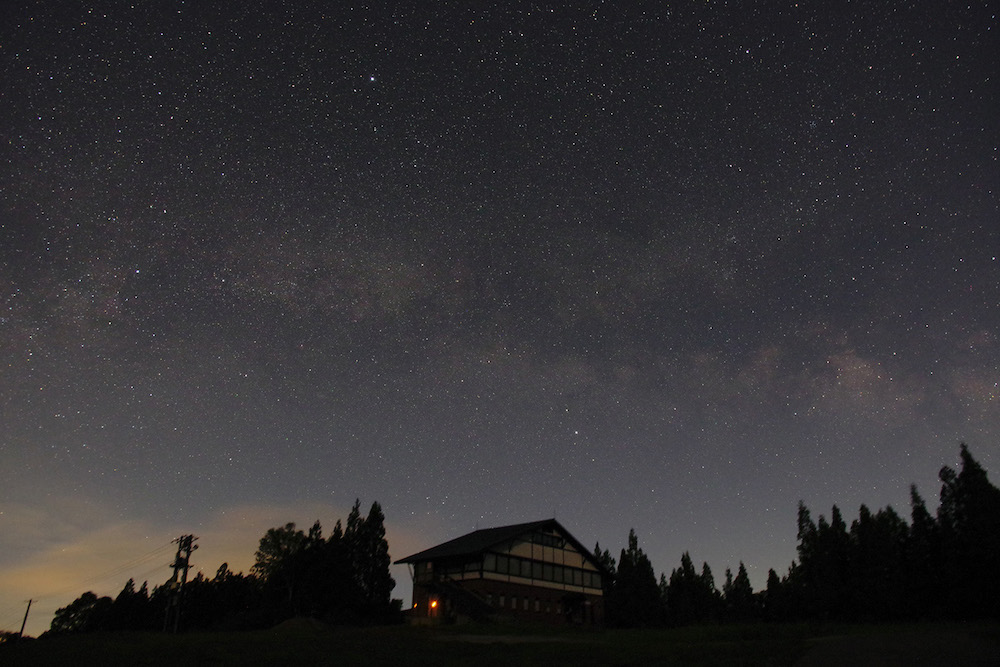 Lenses that you have been keeping in a closet - even some older, cheaper models - may turn out to be valuable assets in your astrophotography.

People like me who travel for the sole purpose of astrophotography may be a rare breed, but I know there are many people who travel to places where they can see beautiful starry skies. They might even experience a once-in-a-lifetime encounter with a breathtaking, unforgettable sky. If you carry the PENTAX K-70, the PENTAX O-GPS1 and a compact tripod with you, you’re ready to capture images like the one below, and in just a few minutes’ time. 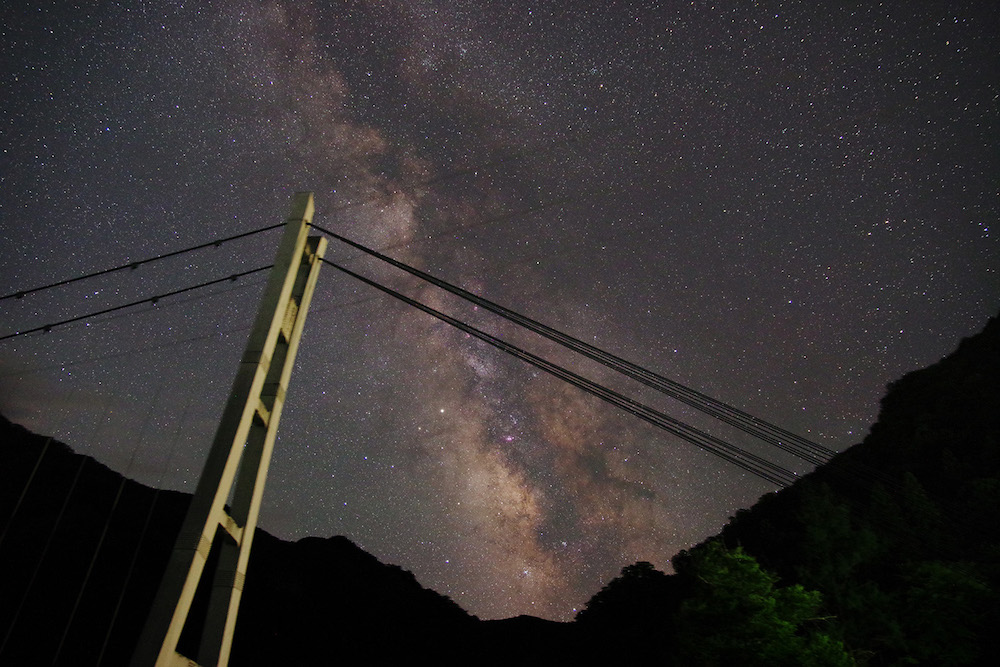 Photo below (Click to enlarge) : The inclusion of artificial lights in a star-lit nightscape can produce interesting images. 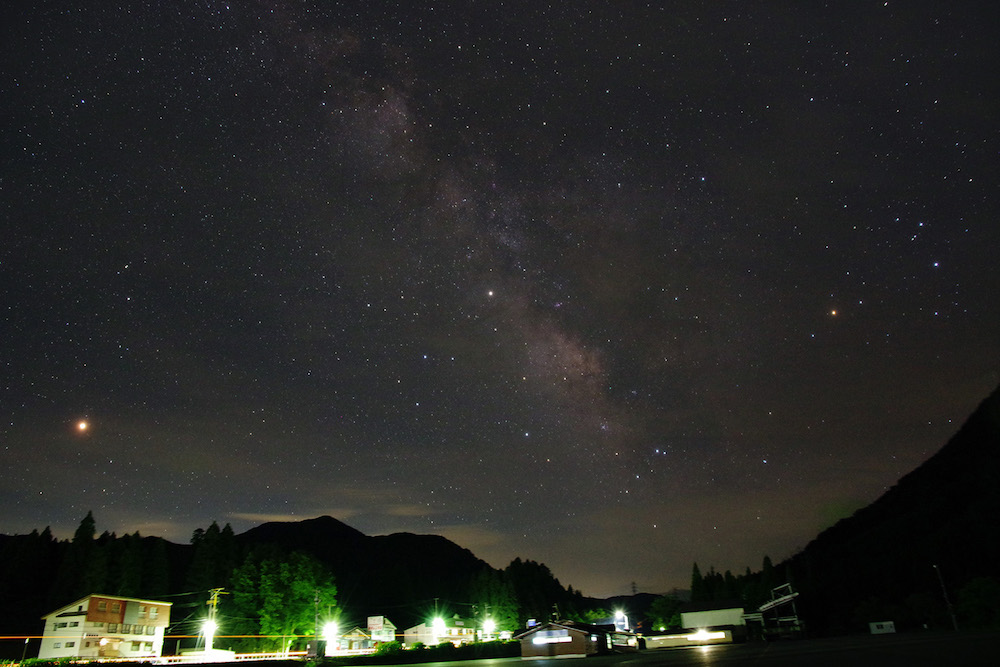 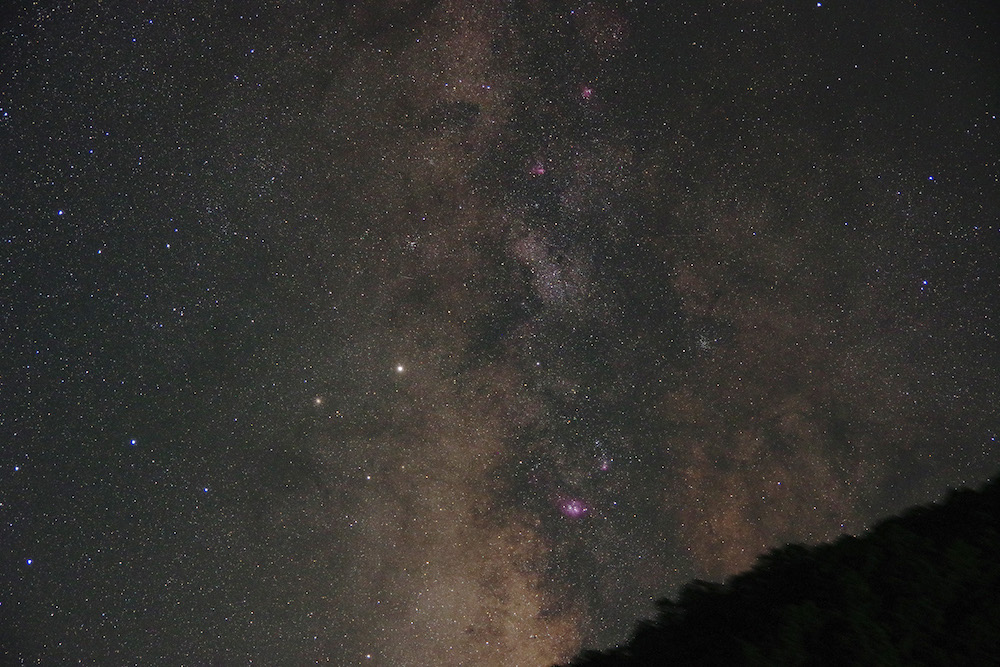 Photo below (Click to enlarge) : The M31 Andromeda Galaxy is captured as series of JPEG images using a PENTAX K-70 and a kit lens, then processed to produce a single, composite image.

This image is synthesized from a series of JPEG images using astrophotographic image processing techniques. The original images were captured with a PENTAX K-70 and a kit lens.

All the images shown in this article were captured with PENTAX cameras and lenses available on the market.

To capture good celestial images, it is important to travel to a location with fairly dark skies. It might be hard for non-astrophotographers, especially woman photographers, to feel comfortable going out alone in the middle of the night. If you are with family or friends, however, you will have many opportunities to capture beautiful celestial images, even when visiting overseas. It would be very hard or almost impossible to carry an equatorial device and a tripod in your baggage, along with all other travel necessities. That’s where the PENTAX gear’s advantage is clear.

If you want to take the kind of images I have shown you here, the imaging system we’ve been describing will let you do the same, easily and rapidly.

My job as an astrophotographic equipment engineer is a unique one; in my work, I take on many different kinds of shooting sessions using various cameras. In some of my assignments, I simply can’t fail — as is the case for working professional photographers. However, the ASTROTRACER’s immediacy has always been a great help to me.

If you are planning to take celestial images in the future, I advise you to get PENTAX gear including the one-of-a-kind ASTROTRACER. I’m sure it can really boost the fun and excitement during travel and at your shooting locations.

PENTAX products introduced in this article are as follows: 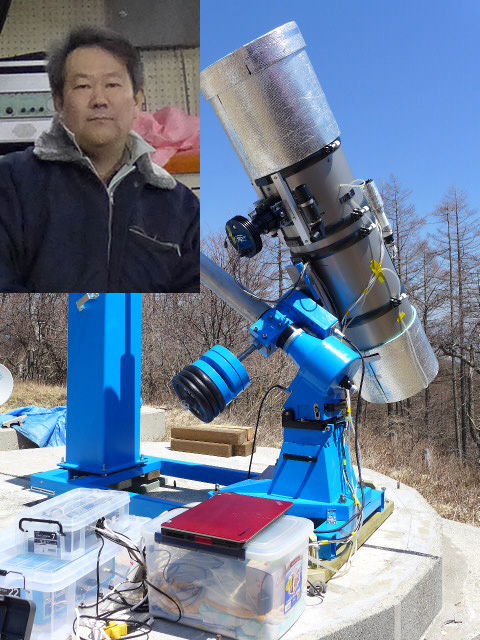