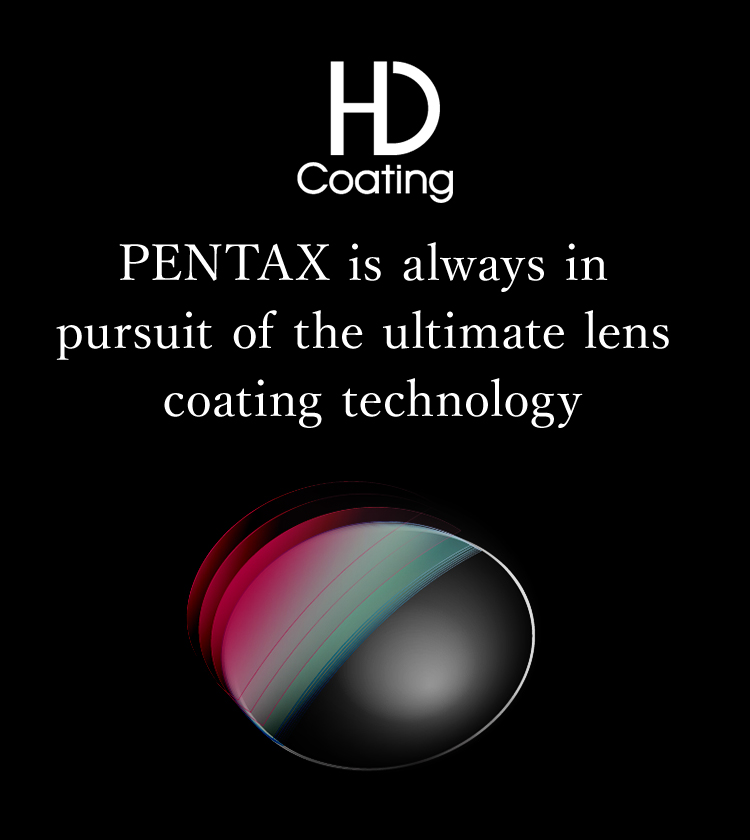 Despite its compact, highly portable design, this high-performance telephoto zoom lens covers the image circle of 35mm-format full-frame digital SLR cameras. Since it is designed to be compact and lightweight with a weather-resistant  construction, it delivers outstanding imaging performance in a wide variety of applications. With the addition of the high-grade, multi-layer HD Coating to the optics, the overall lens coating performance has been optimized. The result is that it delivers sharp, high-contrast images, while minimizing flare and ghost images in backlit situations.

Despite its outstanding portability, assured by a compact, lightweight body measuring 175 millimeters in length and weighing 819 grams (859 grams with a lens hood), this zoom lens delivers exceptional imaging performance over the entire zoom range. Coupled with a weather-resistant construction which prevents intrusion of water into the lens barrel, it performs superbly in all types of active outdoor photography.

When mounted on an APS-C-format camera, its focal length range is extended to the equivalent of 107mm to 322mm in the 35mm format. Its outstanding portability makes outdoor photography simpler, more effortless and more enjoyable. When coupled with the HD PENTAX-DA AF REAR CONVERTER 1.4X AW, you can further extend the focal length range to cover a wider range of subjects.

Thanks to a minimum focusing distance of 0.95 meters and a maximum magnification of 0.32 times, the HD PENTAX-D FA 70-210mm F4ED SDM WR can be used as a telephoto macro lens to expand your freedom of expression. In addition, the lens barrel is designed to be extension-free during autofocusing and zooming operations to keep the overall dimensions intact. When mounted on an APS-C-format camera, the maximum magnification is increased to approximately 0.48 times in the 35mm format. Since it allows you to capture close-up images nearly at half life-size (0.50 times), it will greatly expand the creative freedom of tele-macro photography.

Although their F numbers at open aperture vary, both this lens and the HD PENTAX-D FA★ 70-200mmED DC AW have a similar focal-length range.

The HD PENTAX-D FA★ 70-200mmED DC AW retains the uniform aperture of F2.8 over the entire zoom range to deliver the exceptional image quality characteristic of Star-series lenses, because PENTAX placed priority on imaging performance over magnification in close-range photography. That’s why the middle optical-element group, rather than the large, heavier front optical-element group, is used for focusing operations. By using the middle optical-element group for focusing, this lens provides a broader angle of view for a given focusing distance in close-range photography. Because of this, its maximum magnification is limited to 0.13 times.

On the other hand, the HD PENTAX-D FA 70-210mmED SDM WR has a smaller lens barrel diameter by setting the maximum aperture to F4, while using the front optical-element group for focusing operations. By using the front optical-element group for focusing, this lens provides a narrower angle of view for a given focusing distance in close-range photography. It also benefits from a shorter minimum focusing distance of 0.95 meters. Thanks to these two factors, its maximum magnification is increased to 0.32 times.

Applications:
• Sub-range of 2.0 meters to infinity:
When you want to focus on images such as an airplane or automobile positioned at a distance beyond a wire fence, you can select this sub-range to ensure that the camera does not focus on the fence.
• Sub-range of 0.95 meters to 2.0 meters:
When you want to focus on the subject a short distance away, such as a flower, you can select this sub-range to keep the camera from focusing on distant objects in the background, such as a building.

“Because of its compact design and compatibility with full-frame cameras, the HD PENTAX-D FA 70-210mm F4ED SDM WR is the perfect telephoto zoom lens for my PENTAX K-1. My first impression of this lens was its light weight. Since it weighs only 819 grams and its barrel is designed to be quite slim, I had no trouble carrying it anywhere. I recommend this lens to those who gave up on the 70-200mm F2.8 lens because of its heavy, bulky design. They should pick it up and feel it firsthand. I wish PENTAX had launched this lens simultaneously with the PENTAX K-1.

“Since its minimum focusing distance has been shortened to 0.95 meters, it’s much easier to focus on close-range subjects. Coupled with a maximum magnification of 0.32 times, you can enjoy close-up photography with ease. Even when a fence is in your way in floral photography, you can use it as a telephoto macro lens. With a flower similar in size to a cosmos, you can capture it as a full-frame image.

“This lens also performs well with APS-C-format cameras, and is a great imaging tool to extend the telephoto range. By combining it with the HD PENTAX-DA AF REAR CONVERTER 1.4X AW, you can extend its focal length to approximately 450mm in the 35mm format. This brings you a whole range of new photographic possibilities.

“Captured images are really sharp. But they aren’t overly crisp, and retain the graceful ambience you expect from PENTAX lenses. Those images aren’t merely the result of pursuing pixel-based resolution, but I would rather describe them as the reproduction of natural texture perfect for scenic and portrait photography.

“Because the zoom ring is positioned at the front portion of the lens, you end up holding the front portion of the lens. This assures you a stable shooting posture. Even though it doesn’t provide a tripod pedestal, it maintains a good balance when mounted on a PENTAX KP, without becoming front-heavy. This lens is a perfect partner for a compact SLR camera. I expect that it will enhance mobility in my photographic outings and allow me to capture better, more exciting images.”

Born in 1967 in Nagano Prefecture, Yoshimura worked for a printing company in Tokyo after graduating from high school. After he left the company, he made his debut as a professional photographer while living in Canada for a year. Since then, he has been based in Tokyo while visiting many places both in Japan and abroad, and has been ambitiously engaged in a variety of photographic activities. He is renowned for his artistic expressions of landscapes which capture light, shadow and wind in intriguing compositions, and for his inspiring portraits which convey the liveliness and emotion of local people. He has published a number of photo books, including Sense of Japan, CEMENT, and Supein no Mottomo Utsukusii Mura: Zentoha no Tabi (Most Beautiful Villages in Spain: a Journey through All Traverses).

“In my latest photo book, Supein no Mottomo Utsukushii Mura: Zentoha no Tabi (Most Beautiful Villages in Spain: a Journey through All Traverses) , I captured a number of images using my PENTAX K-1 Mark II. On this trip, I carried three F2.8 zoom lenses, but honestly speaking, I was exhausted by their weight. When PENTAX unveiled this 70-210mm F4 lens, I was so happy that I almost raised my fists in triumph. It weighs just 819 grams. Compared with the 1,755 grams of the 70-200mm F2.8 model, the weight has been cut down to almost a half. A weight reduction of nearly one kilogram makes a big difference.

“When I used this new lens for the first time during my trip to Tejeda village in Spain, I was delighted with its light weight. I always carry one lightweight spare lens in a porch fastened around my waist, so that I can quickly change lenses depending on the subject. I used to carry a wide-angle zoom lens as a spare, but I was surprised by the fact that I could easily fit this telephoto zoom lens in the porch, without removing the lens hood. It also maintained a good balance when mounted on the PENTAX K-1, without bowing excessively forward due to the lens’s weight. I felt no stress at all when I took casual snapshots while strolling on stone-paved alleys.

“What surprised me most was the sharp, crisp images which this lens produced. Since it incorporates a number of ED (Extra-low Dispersion) and anomalous dispersion glass elements, it delivers sharp images over the entire zoom range. I didn’t notice any underexposure in peripheral areas of the image field, or any diffraction at apertures smaller than F16. Upon returning home, I compared their image quality with that of images previously captured by the 70-200mm F2.8 lens, but I couldn’t tell the difference because I tend to close down the aperture for most of my images.

“When I used the new F4 model in a dimly lit cathedral, however, I had to deal with the disadvantage of moving to a smaller maximum aperture by one stop. At first, I suspected that I would suffer failure and end up with many blurred images, but I overcame the problem by slightly raising the camera’s sensitivity setting and turning on its SR (Shake Reduction) mechanism.

“One unexpected surprise this lens presented me during the trip was its close-up shooting capacity, thanks to a minimum focusing distance of 0.95 meters. I don’t own a close-up lens. When I’m on the road, however, I sometimes wish to capture close-up images of flowers or dishes. This zoom lens let me realize these wishes with ease.

“In 2020, I will set out on a journey to capture images for my next photo book, Suisu no Mottomo Utsukushii Mura (Most Beautiful Villages in Switzerland). I will have to cover more distance on foot than my journey in Spain. I’m pretty sure that the 70-210mm F4 lens will play a huge role in the upcoming journey.”

Born in Australia, Matt has been living in Italy since 2002, where his passion for landscape photography took place. His first camera was a Pentax MZ and still today he uses the Pentax system to capture the diverse terrain around the globe. “Capturing my homeland has always been a desire for me, and in recent years my landscape photography workshops in Italy and Patagonia, have made that passion an obsession”

“This versatile and extremely light weight telephoto lens, is surely a system that Pentax users have been long waiting for since the release of the DFA lineup. Closing the bridge for photographers wanting a high performance lens within this focal range, that is lighter than the DFA 70-200mm, but still has the ability to perform well under all situations that you would expect from DFA telephoto.

“Mounting this lens onto a Pentax K1 Mark II, I tested its performance under many conditions, such as landscape, wildlife and street photography. Not only did the focus system respond very quickly and accurately (thanks to the help of the in-built focus range limiter), being an F4 gave off a lovely soft bokeh, the 0.95 meters focus distance gave for lovely intimate captures, the focus subjects were tack sharp, the weather sealing brilliant while shooting under harsh conditions, and the build quality is what we can expect from all DFA lenses.

“As a landscape photography that spends a lot of time travelling and hiking to difficult locations, having a lightweight telephoto lens is an essential part of my kit to go. I would recommend this lens to any landscape photographer looking for a lens with these characteristics, and seeing it perform in other circumstances I would recommend it to anyone shooting portrait, wildlife or even street photography.”